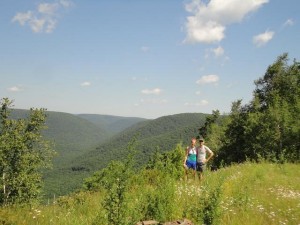 Joel and Katie were born and raised in Eastern Pennsylvania.  As children, we look back fondly on our times spent outdoors.  Joel was a (failed) Boy Scout and loves to tell stories about overnight backpacking trips–they would eat hotdogs and peanut butter (yea, I know, super weird…but it’s awesome so you should try it now).  Katie’s parents would drag the kids along to hikes at Rickett’s Glen and Boulder Field.

We met at Penn State-University Park (WE ARE PENN STATE!) in the late 90’s and married there in 2005.

And, as adults, we found that we really enjoyed hiking.  Growing up in Pennsylvania we always knew the AT was there, but never really contemplated the idea of a Thru-Hike.  But, slowly and surely, the idea of a Thru-Hike became more than just an idea.  Hikes in Central PA and the Western U.S. became vacations and weekend backpacking trips on the AT became the norm.

We began building up our savings and planning in earnest, and decided that 2014 was the year.   Blessed by our generous friends and family, we are very excited to start in April.

In Joel’s spare time, he enjoys playing bass and guitar and nerding around writing software and mobile applications (apps.)   Katie enjoys baking and reading, and when she has a house, she enjoys decorating.

Some of Joel’s favorite foods are: