Straight chilling and resting for the zero day at the Hike Inn…nothing exciting to report today. Got to watch all my stories!

I’m super excited to head out into the Smokies and Tennessee tomorrow for some big mileage days. It’s not clear if there is any cell coverage in the park, so it might be a few days before I can update the blog.

We had a good bit of rain last night and the tarp did not leak, so that was good. We hiked about 11 miles of rugged terrain down into Fontana Dam around lunch. 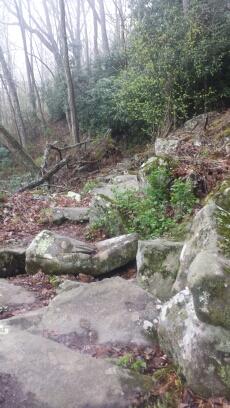 The dam itself is cool and is the largest east of the Rockies. 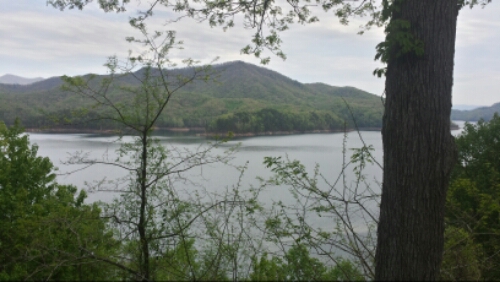 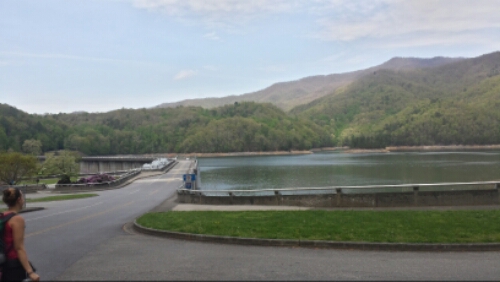 AT goes right over the dam, Smokies in background 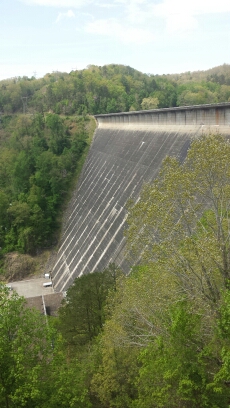 We decided to stay tonight and tomorrow at the nearby Hike Inn. Jeff from the inn picked us up and his wife Nancy took us into Robbinsville for dinner and groceries. Our third maildrop with resupplies was here when we arrived (Thanks Ma and Pa Hnatow).

Tomorrow (Tuesday) we have our first true zero day with no hiking at all since we started, so that will be really good to rest our sore feet, knees, and muscles for a whole day. Jeff from the Hike Inn also told us about 2/3 of attempted thru-hikers quit by or before Fontana Dam and that we made it through the toughest and most rugged part of the trail (outside of New Hampshire and Maine), so that was really encouraging to hear.

Vital stats :
Mood – psyched
Physical state – sore but good
Smell – so much better than this morning
Song stuck in my head – Cuckoo Song by A Silent Film

Today was another hot, tough, but really good day. We hiked out of Grassy Gap and continued up the big ascent out of the NOC. We could see the Nantahala Gorge where they do the whitewater rafting from a spot called the Jump-up. 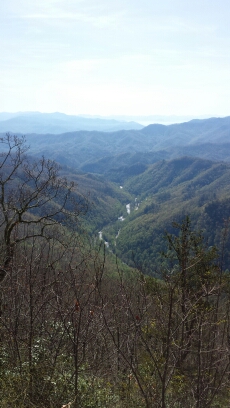 We kept going up and up to the summit of Cheoah Bald for more great views. North Carolina seems to have a spectacular view every couple miles. 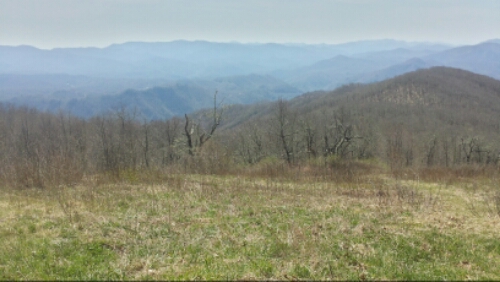 We saw our second one of these guys on the trail in the last 2 days…I guess they are enjoying the warmer weather down here. 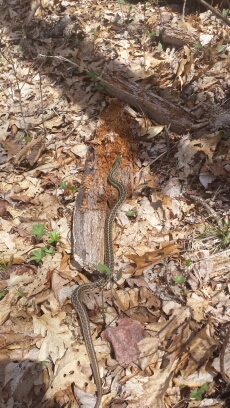 After that we got some trail magic (fresh apples) at Stecoah Gap and then had a few tough climbs, notably one called Jacob’s Ladder. We had a little bit of trouble finding a flat spot to camp in the evening. The trail through NC is on so many mountains, ridges, and cliffs that there is very little flat land around it seems. We found a nice little stealth site a couple hundred yards off the trail slightly before Hogback Gap. We hiked about 15 miles today. END_OF_DOCUMENT_TOKEN_TO_BE_REPLACED

We had straight up warm to hot weather today. Temps felt like the 80’s. It was a challenging day with a huge amount of elevation change. We started with a few summits in the AM and had lunch on Wesser Bald.

Wesser had a cool fire tower that was open all the way to the top, so we went up. Completely amazing 360 views of the mountains that just seem to go on forever. I tried to take a panoramic pic but I’m not sure how it came out as it’s tough to tell on my phone.

After that most of the afternoon consisted of a huge 4000 foot descent to the Nantahala Outdoor Center, referred to as the NOC. It’s a complex for whitewater rafting amd kayaking and stuff like that. They also had a live band, bbq restaurant, and loads of beer. 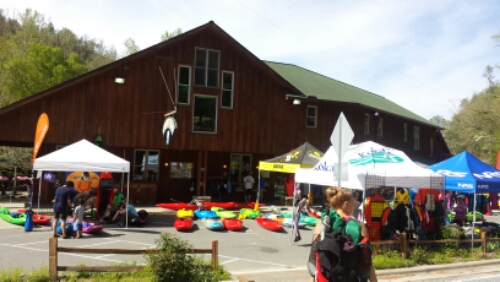 It was super tough to pass up but we pushed on for a few more miles up the giant ascent out of there. From the elevation profiles of the entire trail this descent and ascent appears to be one of the biggest anywhere. We found one of the few campsites on the way up in Grassy Gap and made camp after a hot, tough 17.5 mile day. 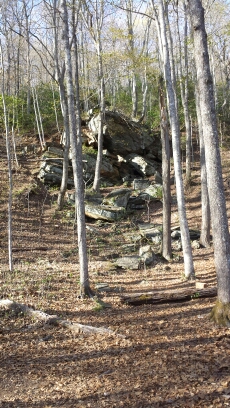 Vital stats:
Mood – determined
Physical state – feet and knees are feeling it after the massively long descent, but good
Smell – pure funk
Song stuck in my head – Settle Down by The 1975

We took a leisurely start to the day by waiting until the 11am Ron Haven shuttle back to the trail. This allowed us to stroll around Main Street in Franklin a little and get some iced coffees. Roughing it!

We got off the shuttle with a bunch of other thru-hikers and headed out. Since we have a reservation on Tuesday in Fontana Dam we are taking it relatively easier by limiting ourselves to 15 miles or less. Most of the day the weather threatened rain and thunderstorms but we lucked out because it never did. The first bald (Silah) we skipped the side trail to the summit because of the threatening clouds… 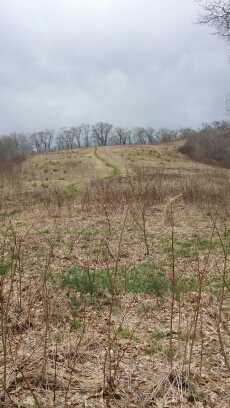 Side trail to Silah bald summit

The 2nd bald, Wayah, was very cool.  There was a large stone fire tower where we hung out with a bunch of other thru-hikers and took in the awesome views. 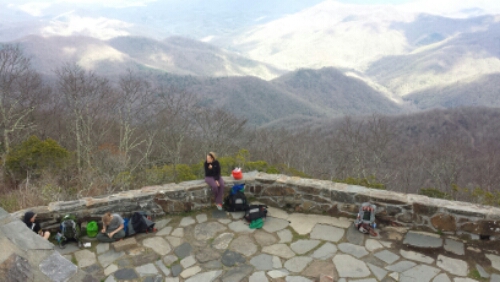 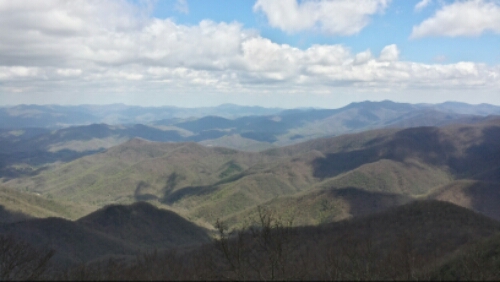 We hiked a few more miles for a total of about 12.5 and then made camp in Licklog Gap (lol). We made a campfire with Slingshot, John from Sharon, PA, and a few other cool people. We chatted about serial killers. Good stuff to chat about in the woods!

Vital stats :
Mood – good
Physical state – sore but good
Smell – it’s been much worse
Song stuck in my head – Story of my life by One D (shut up Dave)

We hiked about 4 miles early today to catch the 9am shuttle into Franklin. Had some cool morning sun shining down. 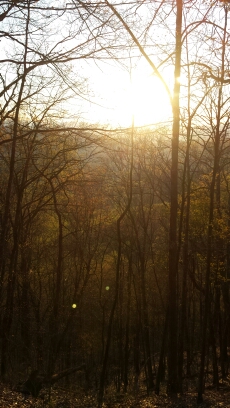 The shuttle here is run by Ron Haven, who owns the Budget Inn in Franklin, runs numerous daily shuttles for hikers, is Macon county commissioner, and was a semi-professional wrestler from 1976 to 1981. This dude is amazingly friendly and seriously awesome. We showered and laundered up and gorged on some sports bar food for lunch. Later we took  yet another Ron Haven – supplied shuttle out to a small local outfit called “Walmart” to buy food for our resupply. Rocked some local pizza from a place called Vito’s for dinner. Otherwise, it’s been a mostly slow and relaxing day. Tomorrow we’re back on the trail. We’ve got about 4 days of pretty tough hiking in NC ahead, then a day off in Fontana Dam, then we head into Tennessee and the Smokies for some good times next week.

I’m sorry I’m not as dedicated as Joel at updating the AT Blog. Instead I thought I’d post capsule updates as things occur to me. Since we just crossed the state line from Georgia to North Carolina, now seems like a good time.

Amicalola State Park lost power, so there was some negative foreboding on our first night. It was cold and gusty, but my dad built a fire in the awesome stone fireplace and we kept up good spirits. 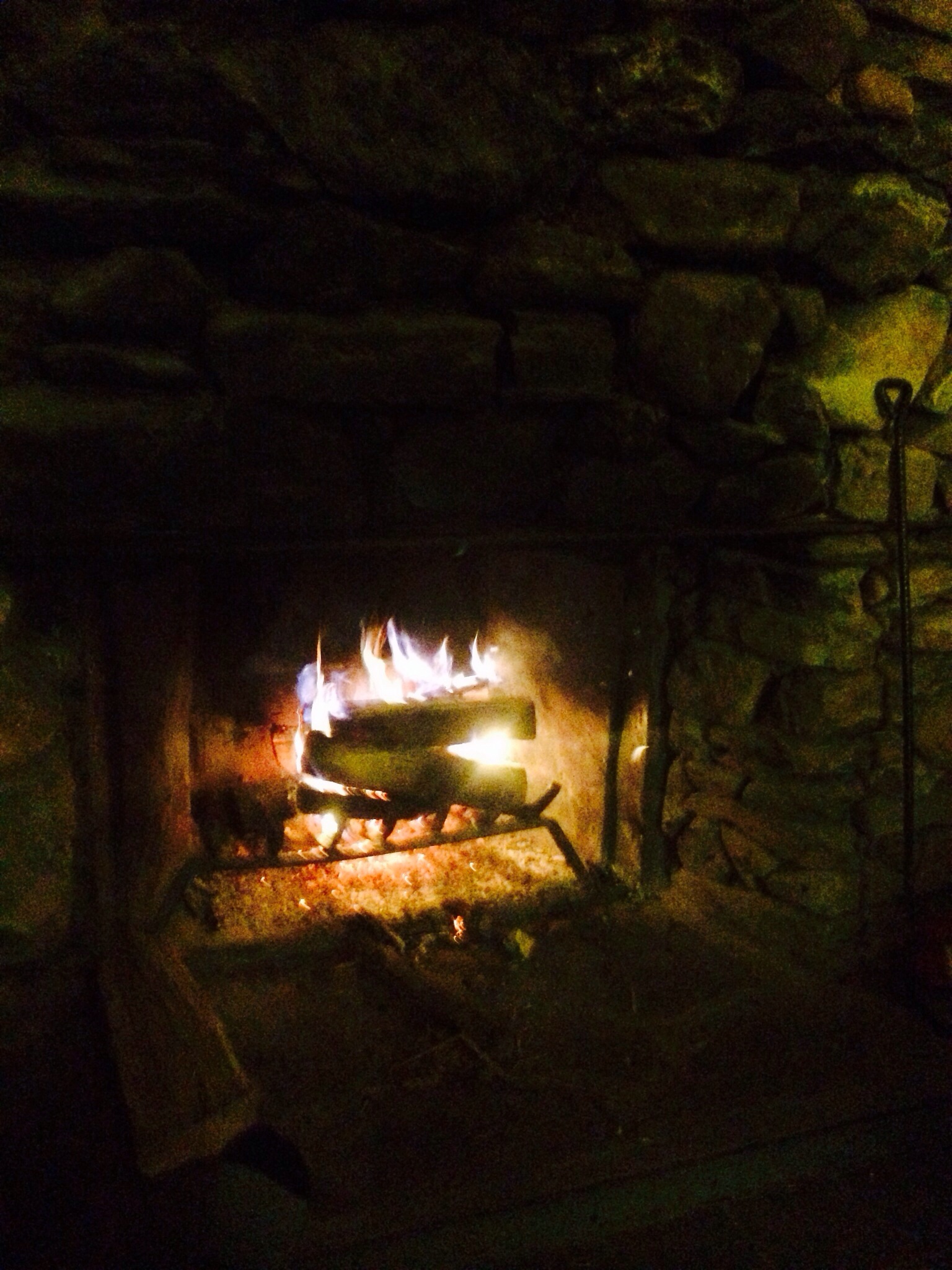 The foreboding didn’t last long. We had a great first day and night. And the 6 days we spent in Georgia were pretty great.

Georgia was tougher than I expected. The elevation changes are much
more difficult than Pennsylvania. But, the scenery certainly made up for the tired legs. There were a lot of soft trails with big pine trees and gentle streams. As well as the all too often chute right up the side of a mountain.

I’ve always thought of myself as coming from the mountains, but Georgia really has mountains. And they go in as far as the eye can see.

Most importantly after a brutal winter in the northeast, Georgia showed so much life just ready to pop. We saw some flora not typical of the northeast (I’m sure my mom will correct me if I’m wrong). Lots of trillium–the only picture I’ve taken. 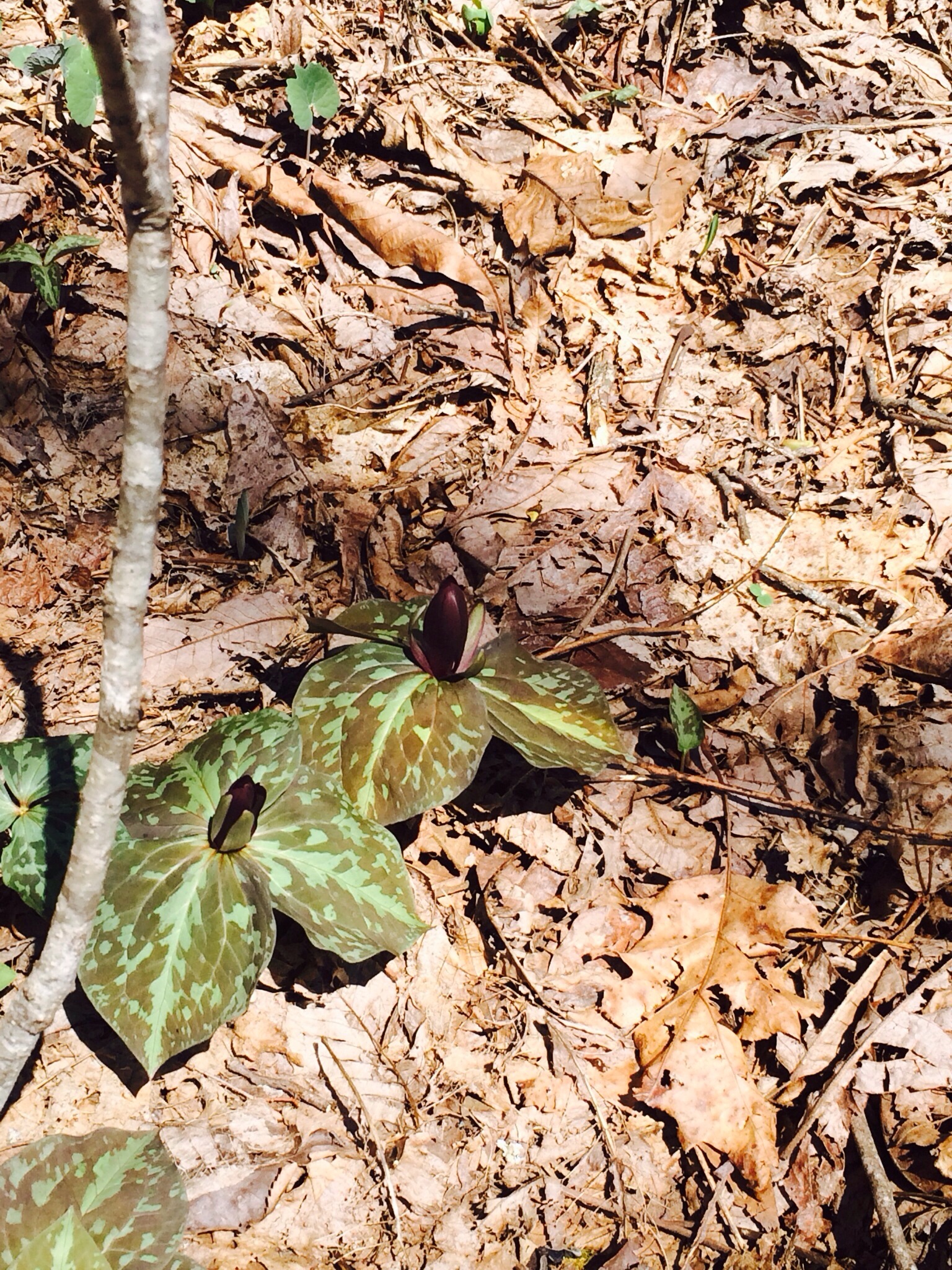 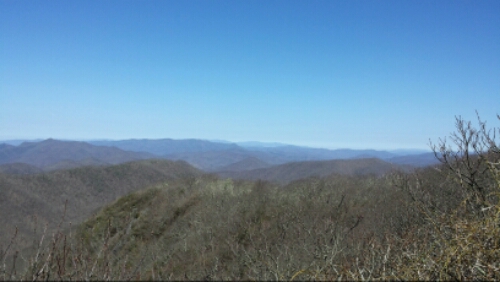 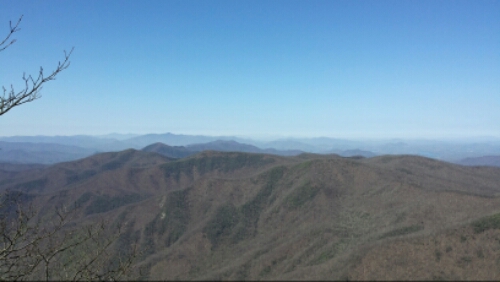 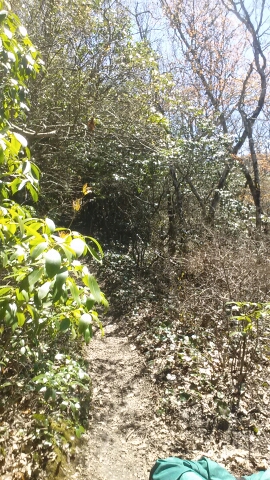 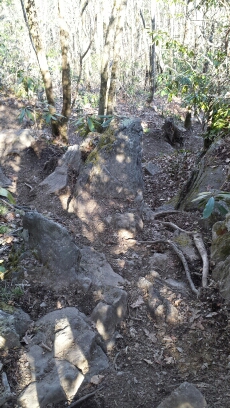 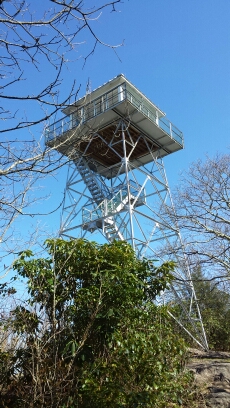 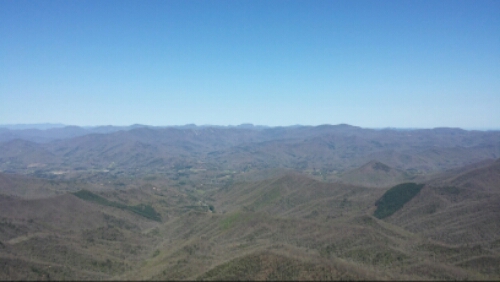 We hopped on the 9am shuttle from the Budget Inn and bade farewell to Hiawasee. We had a mostly cloudy, misty, and rainy day today. Most of the morning had threatening skies, but stayed dry. After a few more Georgian chutes, we crossed in to North Carolina around lunch. Booooom!!! 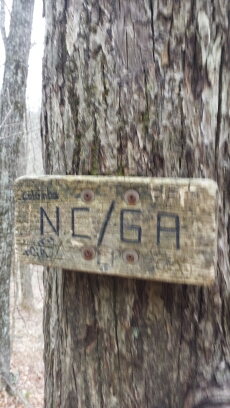 We then headed up towards Courthouse Bald, which has the highest elevation we’ve seen yet. Before that we took a few pics at a cool gnarly tree. 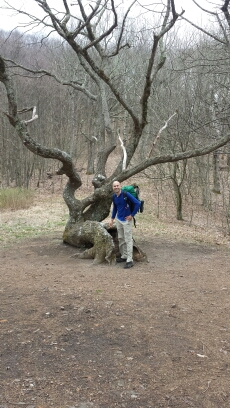 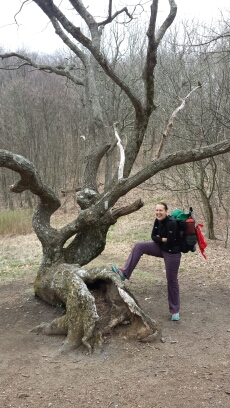 The bald was quite a vertical climb. I’m not sure why it’s called a bald yet since I was the only bald thing up in there that I saw. That’s about when most of the crappy weather hit… 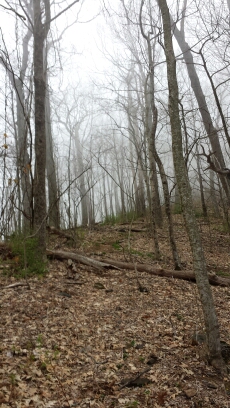 Heading up the bald into the mist and rain.

Most of the day after that was easier. We made a stealth camp off the trail after about 14.5 total miles. Tomorrow the weather looks better so looking forward to some good views of NC.

We took our near-o day today after an easy 4 mile hike in the morning. We planned on staying at the Blueberry Patch Hostel, but ended up staying at the Budget Inn in Hiawasee after chatting with some other thru-hikers at Dick’s Creek Gap. We were easily swayed by the thought of getting our own room vs. sleeping in a common bunk area with snorers. We got the Budget Inn shuttle driver to stop at the Blueberry Patch for our mail drop, then checked in to the Budget Inn. 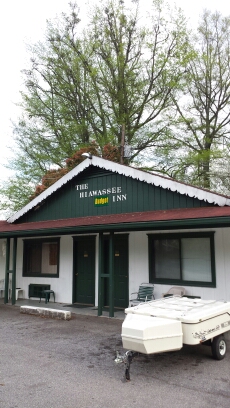 Got to take a hot shower, do laundry, and rock some mexican at a place called Monte Alban for lunch. After that it was a lazy day with intermittent activities like fixing the tarp seam so it doesn’t leak tomorrow and cleaning up our dirty gear. Dinner was at an all you can eat buffet called Daniel’s that had nastily delicious southern fried chicken. I only ate 5 pieces. All in all very nice and relaxing to have an off day.

Tomorrow we cross into North Carolina, so that’s very exciting to finish the first state. Georgia was a challenging start, but a lot of fun. Lots of elevation change and very little flat hiking.

Stoked for some big mountains coming up in NC.