We headed out this morning and almost immediately began our first climb. We hiked up to Lone Mountain. It was a pretty steep climb, but the trail wasn’t too bad. I think we almost went up too fast and tired ourselves out a bit because the tread was pretty smooth compared to the normal crazy rock and root party that Maine throws. We got to the top, but the actual summit and viewpoint was another 150 yards up a pretty nasty looking chute of rocks, so we skipped it. We were trying to get over the 4000 footers before all the thunderstorms that were predicted hit us by late afternoon, also. We hiked along and then had our second big climb up and over the northwest corner of Spaulding Mountain. It was another pretty tough one. Then the descent down off this ridge was wickedly steep. It took quite a while to get down to the South Branch Carrabassett River at the bottom. There were a few hawks sailing seemingly around our heads as we climbed down the precarious rocks. 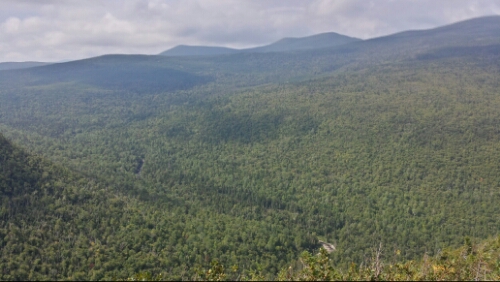 Valley between Sugarloaf and Crockers

This river was the 3rd one that can require a ford, but all of them have been low enough that we could rock hop across without getting wet so far. I think there are a few farther north that we won’t be able to avoid fording, however. After we ate lunch by the river, we started the long 2000+ feet, 2+ mile climb up to the Crocker Range. The climb started pretty easily, but then after a campsite junction it got intensely steep. It levelled a bit off after a half mile or so, but the remaining half mile seemed to just go on forever. Once we hit the summit, the clouds had overtaken all the views, too. A storm seemed imminent, but it held out and then actually got nice and sunny later in the day. We climbed over North Crocker and then down off the ridge. We found an established campsite on the way down and grabbed it.

It was another really tough day here in Maine. Our legs are just super beat after all the constant elevation change since we hit the Whites. Tomorrow looks to be another pretty tough day with the Bigelow Range looming, but after that we should have a bit of an easier stretch as we head towards the town of Caratunk later this week.

Vital stats for Tuesday, September 2nd :
Milestone – less than 200 miles to Katahdin
Mountains remaining – 6
Miles hiked today – 14.9
Mood – feeling excited about having less than 200 miles left
Physical state – tired, but good otherwise
Smell – the moose are avoiding me now (come on you moose, I just want to see one of you!!)
Song stuck in my head – Go Do by Jónsi

We decided it was finally time to depart Rangeley this morning after breakfast. We quickly got a hitch out of town from a nice local guy who was really into all the various hunting seasons they have up here, including the lottery-based moose hunt. We were hiking a little before 9am. We had some pretty big mountain climbs today going over Saddleback, The Horn, and Saddleback Junior. The climb to Saddleback was very root-filled and slow until we got up above treeline. Once we got up there, we had multiple false summits, but it was pretty nice hiking so we didn’t mind. 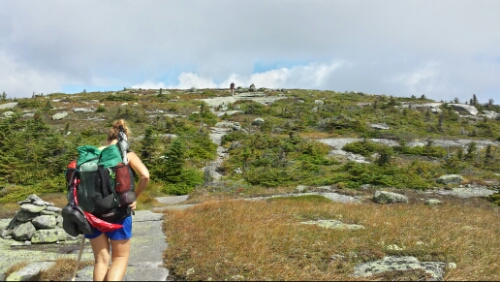 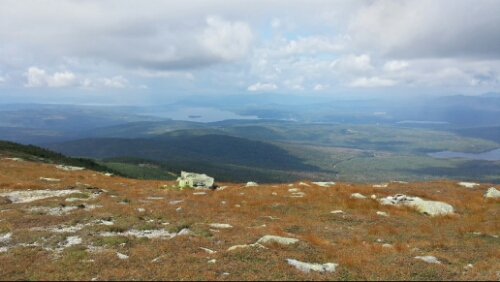 Rangeley Lake off in the distance from Saddleback summit

We then hiked down some steep and slick trail and then back up to The Horn. We grabbed some lunch and chatted with some other thru-hikers up there. We got a bit of rain shortly after that as we descended The Horn and ascended the last of the 3 peaks on this range, Saddleback Junior. By the time we summited, the rain had blown out and it was sunny again. The clouds were blowing through fast all day. 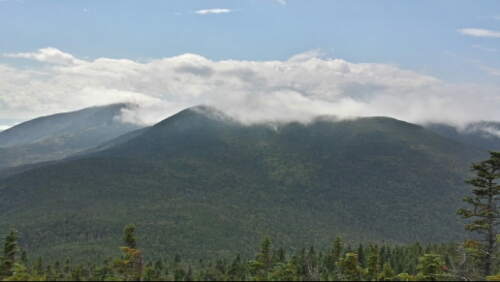 Clouds covering Saddleback and The Horn as seen from Saddleback Junior

A lot of the trail was tricky today, with loads of wet roots and rocks to contend with. 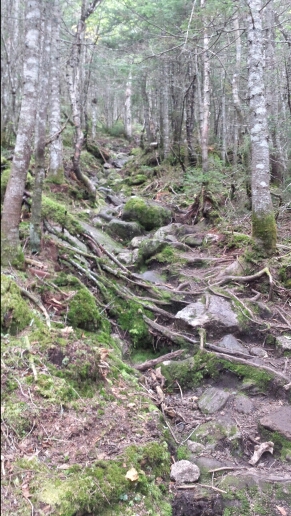 We hiked down off that ridge and then briefly back up the next ridge and then found a little stealth spot off the Sluice Brook. Tomorrow we have the fairly large Spaulding/Sugarloaf/Crocker range to tackle.

Vital stats for Monday, September 1st :
Mountains remaining – 9
Miles hiked today – 14.2
Mood – good, glad to be back on the trail and heading towards the goal again
Physical state – improved after 2 days off, but still tired from another tough Maine day
Smell – sweaty moose
Song stuck in my head – Elderly Woman Behind The Counter In A Small Town by Pearl Jam