We headed out of the Relax Inn and grabbed breakfast at The Barn, which is basically a diner-ish restaurant across from the truck stop near where the trail goes under I-81. It was pretty good stuff. We hit the trail around 9am. It was pretty similar to the past few days with rolling ridges and occasional farmland pasture/meadow crossings. 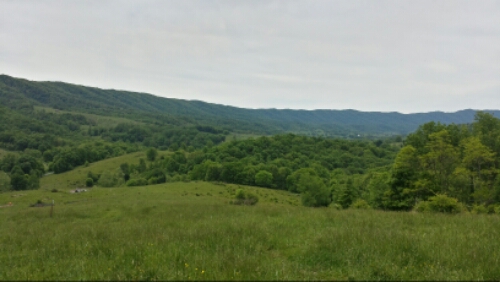 Some ridges in the distance that we hiked down from

Today was probably one of our bigger elevation gain and loss days in this part of Virginia and it really wasn’t bad. The trail is mostly nice and smooth here, which makes it so much easier to cruise at a quick pace on. The weather was also fantastic all day, so that helped make it really nice. We started a large climb up towards Chestnut Knob and found a nice old roadbed halfway up and called it a day after around 20 miles.