Last night we heard a coyote for the first time. Early in the night, it sounded like it annihilated some other animal for dinner. It was crazy sounding. Then late in the night, it started yipping and howling. It was pretty eerie and cool.

Today was another fantastic day of weather for hiking. I decided to take videos of a lot of today to later make a “day in the life of a thru-hiker” video compilation that shows all the routine stuff we do throughout the day that is unique to thru-hikers. I think it’ll be cool, but I won’t get to post it until we’re done. It was good day to do this because it was action packed.

We started the morning with a hike by Fitzgerald Falls. 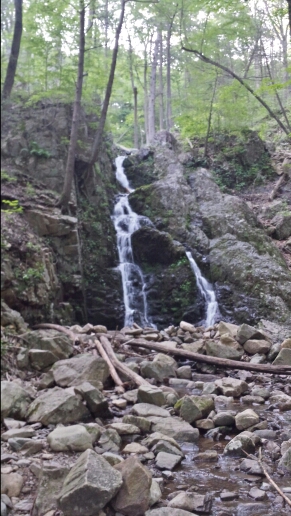 Fitzgerald Falls. The water was mostly not orangey yellow like the rest of the water in Jersey and New York

Then we climbed Buchanan and Arden Mountain, which were both very steep and full of rock scrambles. There are numerous swamps and bogs in the gaps between these mountains, too. The terrain is most definitely getting harder again. On the positive side, it’s also getting more interesting.

We ran into some good trail magic around lunch. One of the thru-hikers in this vicinity is a recent retiree named Mad Jack. His wife, Good Vibrations, is following his hike with a brand new Airstream. We chatted with them both for a bit today and Good Vibrations hooked us up with some sodas. Less than a mile later, we ran into a guy named Tent Man who works for campmor.com. He hooked us up with more soda, fruit (gotta eat something healthy once every month or two), candy, darn-tuff socks (usually $20 or so), Mountain House dinners, protein bars, denatured alcohol (for our cook stove), and numerous other goodies. This dude was awesome and was literally shoving this stuff on us. He also gave us some good tips on the area we are in and even some tips about camping up in Maine. 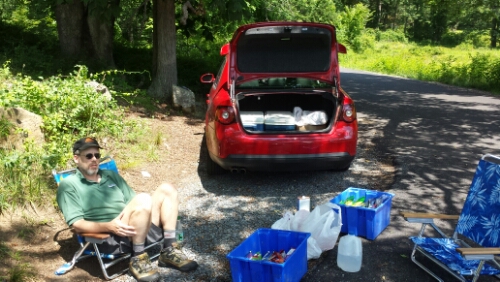 We then hiked into Harriman State Park. Wow, this place is cool. It’s like a hiker playground. It has everything. It’s got lakes, ponds, swamps, boulder scrambles, mountain climbs, views, grassy peaks, midgets on grassy peaks, etc. 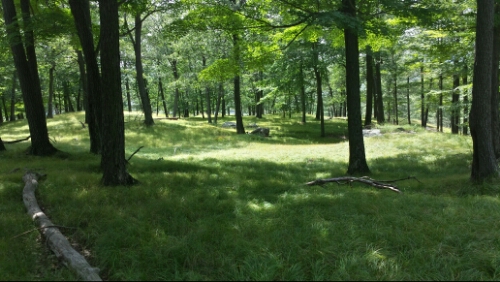 It certainly seems like it gets a lot of foot traffic, as some of the deer let me get really close, but it’s an awesome place. We also went through the very tight Lemon Squeezer. I have some amusing videos of us trying to fit through with our packs. 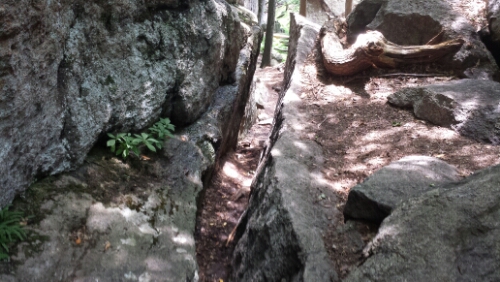 We later stealth camped in a nice flat spot a couple hundred yards from the trail somewhat near Seven Lakes Drive.

Tomorrow we are excited to head into Fort Montgomery after about a 12 mile hike. It’ll be excellent to take a nearo to get cleaned up and relax in town with a beer or two or three.