We ate breakfast at Maria’s house this morning. She gives hikers 3 eggs each, toast, coffee, and fruit. She set everything out for us to make it ourselves. So freaking cute. Here she is with her friend Stefania. 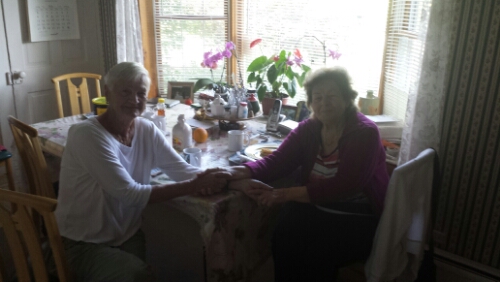 After breakfast and a bunch of chatting, she then gave us a ride back to the trail head so we didn’t have to road walk. It was around 10am by then, so it was much later than we’d like to have started, but it was well worth it because Maria is so awesome.

The hike was pretty nice today. Other than a tiny sprinkle of rain around lunch, the weather was perfect. We had some nice views from Bear Mountain and then later a lot of good ones from Mt. Race as we crossed into Massachusetts. 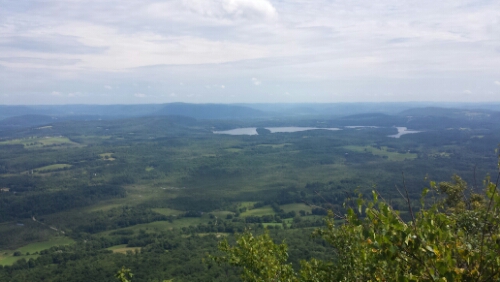 We also went through an area called Sage’s Ravine, which was really pretty. It had some falls and other scenery that reminded me of the falls trail in Rickett’s Glen State Park in PA. 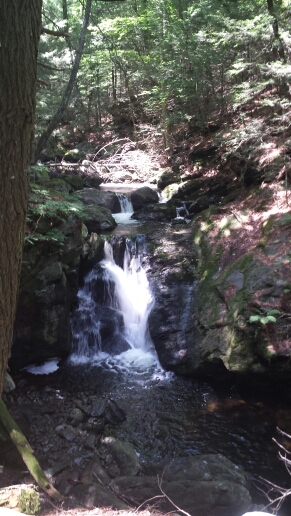 We later had a pretty good climb up Mt. Everett. It was fairly steep and rocky and I think indicative of some of the more challenging mountains to come in the near future. The elevation is also getting slightly higher now, as the climbs today were finally back up over 2000 feet in elevation for the first time since PA. We can also faintly see some of the bigger mountains off in the distance now to the north, which is so exciting.

Due to the late start, we didn’t get quite as far as we would have liked. We should be able to make it up pretty easily in the next few days, though. We found a nice breezy stealth spot up near a vista called the Jug End. Tomorrow we continue the trek through Massachusetts.

Vital stats for Saturday, July 26th :
Milestone – done with Connecticut, now in Massachusetts (10 down, 4 to go!). Also, 1500 miles hiked.
Miles hiked today – 15.8
Mood – excellent
Physical state – good
Smell – straight up DEET (lots of mosquito up in here)
Song stuck in my head – see awesomeness below
Rap –
Every 500 miles
I drop some dope freestyles
I usually rap on a log
to a frog but not on the blog
But for fifteen hundo
I’m giving you my thundo
So I ain’t got no streets
To drop all my dope beats
I just got gnarly trails
Filled wit bears, snakes, n snails
So just got 600 left to go
To work on my rap flow
By the time I be on Katahdin
Ya head be weaving and bobbin
Some of deez mountains be so sheer
When we climb we ain’t got no fear
Gonna be a rapper for ma next career
Peace out, time to grab a beer