We got up and on the trail pretty early today to make up some mileage and get closer to Dalton, MA, later in the week. The skies were threatening almost from sunrise on. We broke camp and got some hiking in before the storms, though. We had a lot of cool sun and mist coming off of the Jug End. 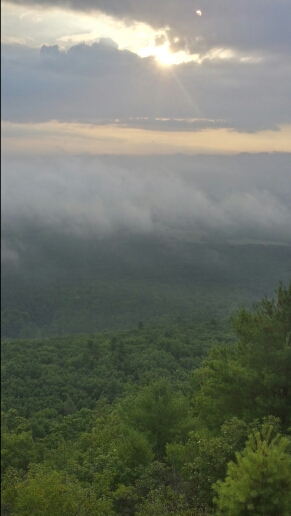 The descent was pretty steep and rocky.

We hiked through a few scenic fields early, too.

A mile or two later, we hiked through a very neat pine forest. It was, however, inhabited by the most amount of mosquitoes I’ve ever seen. They were literally just swarming around our heads and packs. Thankfully the 100% DEET mostly works. As soon as you start to sweat it off though, the little blood suckers are on you. I thought the woods in PA had a lot of mosquitoes in the summer, but Connecticut and Massachusetts are way crazy worse.

Shortly after we went through Bugville, we got a couple big thunderstorms. We were under the forest canopy, but one thunderclap and lightning strike was really close to us and scared the living crap out of us (strangely enough, this improved my stench).

A lot of the hiking also was super muddy. I don’t know if it’s just because of the storms or if western Massachusetts is always just a giant bug swamp.

It was a tough day with the weather being uncooperative, the constant bugs, and the mud, but we hit our 20 mile goal. We camped not too far past the (swampy) East Brook. More storms are threatening for tonight and tomorrow, so that should give us some more muddy Massachusetts fun tomorrow. Oh yeah, I got stung by another yellow jacket today. I don’t know why those things have so much beef with me.

Vital stats for Sunday, July 27th :
Miles hiked today – 20.4
Mood – not bugging out
Physical state – tired from being extra careful on the wet and muddy trail today
Smell – a wretched concoction of wet dog, DEET, sweaty man stank, and Ramen noodles
Song stuck in my head – Matthew James by Bad Suns (can’t get this damn song out of my head)