We had another day of pretty good hiking weather. The temperature stayed relatively cool until mid afternoon and even then it wasn’t too bad. We left the state park in the morning and had a view of the lake on the way out. 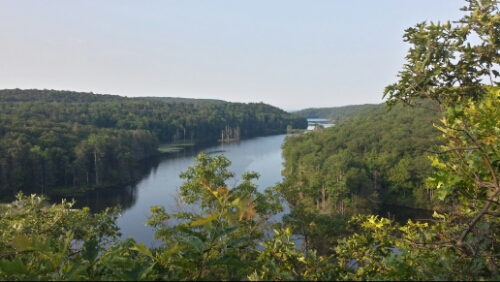 We then had a small climb up to Shenandoah Mountain (there sure are a lot of things named Shenandoah). 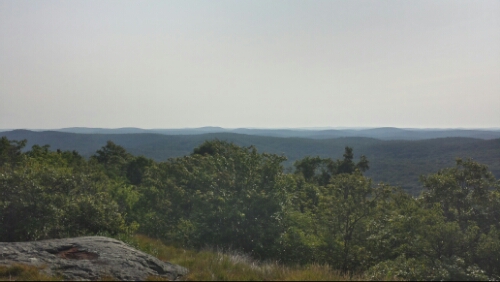 We then chatted with some other thru-hikers at the RPH Shelter. The growing sentiment seems to be that most of us are excited to get further north and back to the bigger and more scenic mountains. All in good time though, it will be here before you know it.

We popped into a pizzeria a half mile off the trail for lunch. They were a little unfriendly towards us hikers in that the dude told me he’d bring the pizza outside to us, which we took as a hint that we shouldn’t sit inside (not really a major problem, it was like 100 degrees in the place). Maybe he wasn’t being a dick, but it came across that way a little. Oh well, it happens. The food was still good.

Most of the hiking was similar to yesterday – nice, but not overly scenic. We stopped and made camp within sight of Nuclear Lake. Yea, this is a real thing. Apparently some company did contract nuclear experiments for the government from the 50’s to the late 70’s. I guess they got some plutonium powder in the lake during an accident. Oops! Tastes fine to me… It’s actually really a nice little peaceful place. I haven’t taken a nice pic yet, but it looks similar to the lake pic up above.