Wow, we hit 100 days already since this insane adventure started way back in April. That’s crazy. I can’t believe we are over 2/3 done already.

Last night was a good night to stay in town, as we had some severe storms roll through. Power went off and on a few times at the motel. We binge watched American Ninja Warrior. That looks like it would be rad to try. I’m sure I would fail miserably!

Anyway, today was a total opposite of yesterday in terms of hiker weather. It was perfect for hiking. We had a nice breeze and high 70’s all day. Fantastic. I think it majorly helped break our funk by having an afternoon off and a beautiful weather day today. We road walked back to the trail around 9:30am. We had a few small steep climbs again, but they were easier because it wasn’t 200 degrees. We had a view to the north of the upcoming Berkshire range in Massachusetts. We’ll be hitting those this weekend. It’s nice to see some bigger mountains again. 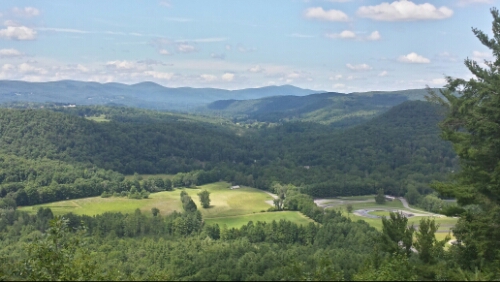 If you look closely, there is a race track in the valley in the picture above. It is the Skip Barber racing school according to Google Maps. We could hear the cars screeching around the course for a few miles.

Later, we hiked along the Housatonic River again. This time we came close to an impressive waterfall. 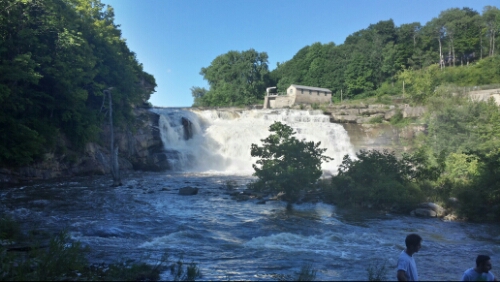 We hiked up past the river and camped near the summit of Mount Prospect in a nice pine forest. It’s another spot that would be really awesome if it weren’t for the hoards of mosquitoes!

Tomorrow we are taking a planned nearo and resupply day in Salisbury, CT. We only have 4 miles or so to get to town, so it’s really close to an actual nearo for us, not one of these 15 mile “nearo” days that we were doing in the past.