We had some light rain overnight, so everything this morning was good and slick. The pine forest was cool looking though as the morning sun burnt off the misty clouds. 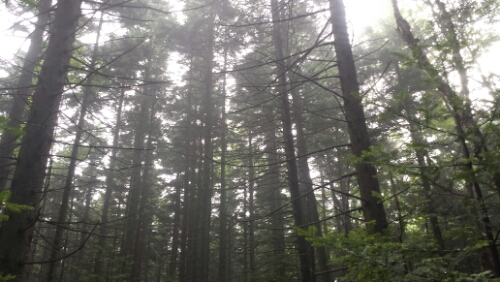 Once the humidity blew out, we had a fantastic weather day. We had a big day with lots of climbing, so that was great. We climbed Bear Mountain (I think every state has a Bear Mountain), Clarendon Gorge (which had a pretty high suspension bridge that I forgot to photograph), Beacon Hill, and then big nasty old Killington last. The climb out of the Gorge had a view of the Rutland Airport, which did not appear very busy.

The climb up to Killington was long and got really rocky and root-filled towards the top, so it was a bit slow going at times. We made camp not quite at the summit, but my GPS tells me we are at 3844 feet, so we are close. Google maps also tells me we are super close to some of the ski trails on Killington here. The wind is blowing and it’s really cold up here tonight. Brrrrr…it’s a good thing we are meeting the supply team of Packy and Tapey tomorrow with our winter gear. I can’t believe I need my winter stuff in August. Anyway, we are really looking forward to tomorrow, which is a nearo, and Friday, which is a zero day, with Ma and Pa Hnatow!

Vital stats for Wednesday, August 6th –
Milestone – less than 500 miles left to Katahdin
Miles hiked today – 21.6
Mood – good and cold!
Smell – the cold does help keep the stanky stank contained
Song stuck in my head – Be Quiet And Drive (Far Away) by the Deftones

After some breakfast and a ride back to the trail from our awesome hosts, we got moving again under some sunny skies. Thanks again very much! We had a climb right from the trailhead up Bromley Mountain. The climb wasn’t too bad. The last quarter mile or so was literally right on a ski trail. This was pretty cool. 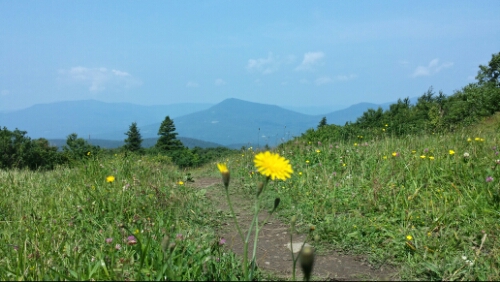 Bromley Mountain with trail snaking up the ski slope

It was a green circle trail, so pretty easy skiing!

Next up we climbed Styles Peak. Who would name a peak after that dude from One Direction? So weird, he’s totally going to be in rehab or jail in like 2 weeks probably, if he’s not already. I mean, he’s an amazing musician and a personal hero of mine and all, but I just find it strange. Anyway, it was a little steep, but not overly long of a climb. It went up to another one of great pine forests that Vermont has up above roughly 3000 feet. They are really dense with pine and just great to hike through.
We had a brief scramble up some steep rock face to Baker Peak later in the afternoon. 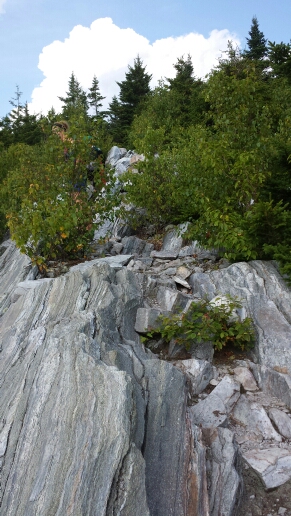 Rocky slope up to Baker Peak, Trippy hiding behind tree

Most of the rest of the day was normal Vermont trail without any big views. We had about 15 minutes of storms and rain in the evening, which made all the roots and rocks nice and slippery.

The last thing we passed was the very cool looking Little Rock Pond. Vermont has a lot of these neat mountain ponds. I think we’d call them lakes in PA for sure. 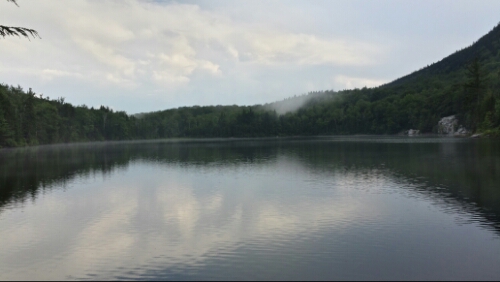 We hiked about another mile from there and camped not far off the trail near a footbridge and stream.

Tomorrow the weather looks better and we are planning a pretty big mileage day. These are probably the last few days we are going to try to do 20 mile days on our thru-hike, so that’s pretty crazy that we are basically almost out of the “easy” stuff.