Last night we stayed in Randy and Linda’s garage loft thing with a couple of other thru-hikers, including a SOBO (South bounder) named Roadrunner and a NOBO couple named Aquaman and Tricks, who we haven’t seen since really early in Virginia. It was cool to hang out with people that we haven’t seen for over 1000 miles. It was also cool to get some firsthand info about the challenges we have coming up in the Whites and Maine from Roadrunner.

Anyway, as rumored, Linda made everyone bacon, eggs, and coffee. They didn’t ask for anything in return, but could easily have charged for everything they gave us. Aquaman, Tricks, and us ended up giving them a few bucks to help pay for some of the hiker food since they were so generous to us.

We left town around 8:30 or so and headed out. I was amused by this road name near West Hartford. 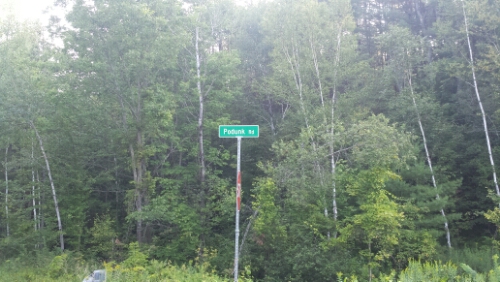 We did a good bit of road walking today. First we went through Norwich, VT, which looked like a nice little town. Then we crossed the Connecticut River and headed into New Hampshire. 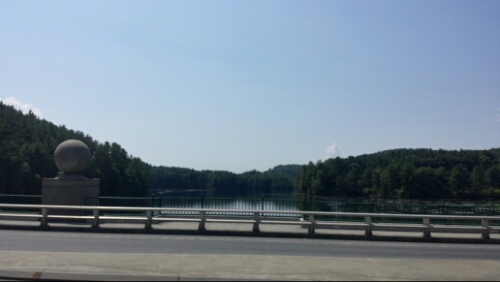 The trail went right down the main street by Dartmouth in Hanover, NH. It was packed with people getting lunch, milling around, smelling like they showered this week, wearing nice clothes, that sort of thing. We got some looks for sure. We grabbed lunch at a mediocre burrito place called Boloco, which was like a cruddy version of a dumpy Chipotle. We then stopped at the food co-op grocery store on the way out of town and got a few minor resupplies for the next couple of days. It would have been tempting to stay had there been a couple cheaper places in town, but that didn’t seem to be the case, so we pushed on. We had a few steep climbs once we got off the road, but the trail was a little easier overall than yesterday. No real views unfortunately, but I predict both the easier trails and the lack of views will end as of tomorrow and go pretty much until we are done with this crazy journey.

We camped in an established spot right next to the Mink Brook at the base of Moose Mountain.

Vital stats for Monday, August 11th :
Milestone – done with Vermont, now in New Hampshire (state 13 of 14!)
Miles hiked today – 18.4
Mood – great to be in NH, getting psyched for the White Mountains
Smell – criminal
Song stuck in my head – It Wasn’t Me by Shaggy