We got up this morning after an action packed night of old dudes farting and snoring like buzz saws. Ahh hostels…will not miss them at all I think. The power was still out there from last night, so we resorted to hiker gruel for breakfast. We headed out around 8am and almost immediately started the climb up Moosilauke. The ascent was big and steep, but not as bad as I thought it would be. It was rocky and rooty, but didn’t require any scrambles or any major changes to our pace. It was wet and slick though and we climbed up in a cloud of mist. We eventually hit the tree line, where the trees are 8 feet tall or shorter or nonexistent, and it was misty and mysterious looking up on top of this giant. 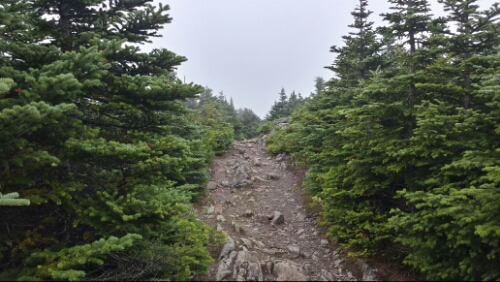 Climbing above the tree line on Moosilauke

The trees disappeared up on the summit. They use rock cairns up here above tree line to mark the trail. It gave it a cool look in the mist. 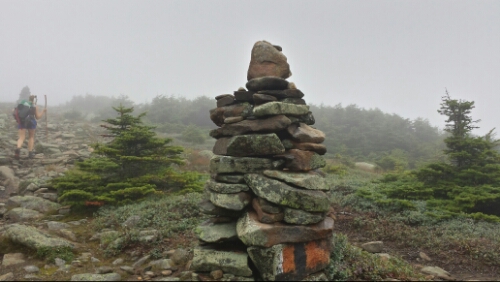 Cairn marking the trail on top of Moosilauke, Trippy hiking along it

We hit the actual summit and had no views unfortunately. 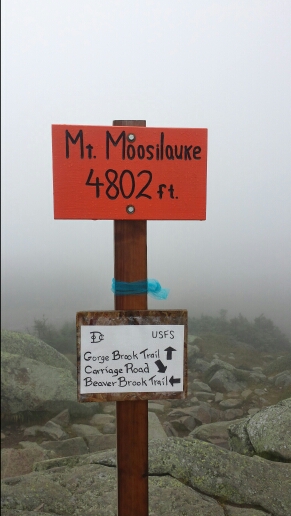 Kind of a bummer, but we were psyched to be on top of this monster nonetheless.

We headed down quickly because the wind was insane up there. It was quite cold and damp. The descent started slowly enough and it actually started to clear up as we went down a bit on the north side. 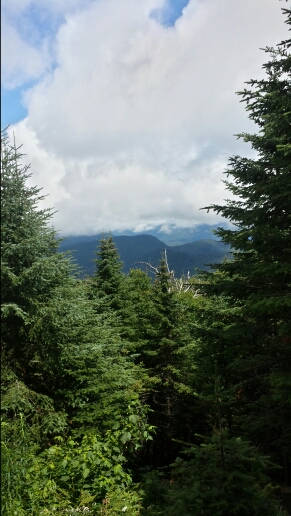 View from the Beaver Brook Shelter at lunch

After the shelter, the descent got crazy. It was super steep, like no other climb down we have had. We moved at only about 1.5 mph at best because of all the slick rocks. It was really beautiful though, as much of it went down along a gushing waterfall. 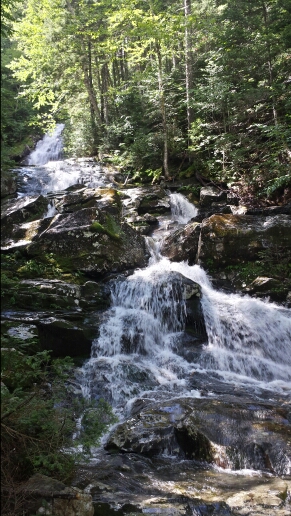 Waterfall on north side of Moosilauke 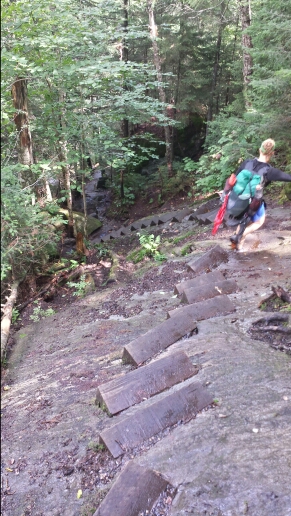 We eventually climbed down many slick and dangerous rocks and got to Kinsman Notch around 2pm, which was a parking lot and a small mountain highway. We needed to get into North Woodstock to grab a maildrop at the post office. We tried to hitch for a bit, but had no luck, probably because I was creeping peeps out. Another thru-hiker named Billy Goat came down and we all called a shuttle service to get to town 5 miles away. We got to town and promptly decided to take a zero day here tomorrow. Both of us are feeling a bit fatigued and we’d like to rest a bit more before tackling more of the challenges ahead. North Woodstock seems like a tourist town with a lot of cool things to check out. I approve of the microbrewery in town, named the Woodstock Inn.

We set the alarm for 5am today to try to get on the trail and up over Mount Cube before the worst of the storms. It started to drizzle around 4:40am, so we didn’t quite beat all the rain. We climbed up Cube, which was rocky and very exposed. The wind was gusting pretty heavily by this time. We had a slow and wet descent down off of the mountain. The rain was off and on throughout most of the morning, but the wind kept blowing hard. We trudged through it. The trail was pretty deserted for obvious reasons. By lunch, it was pouring, blowing everywhere, and getting very cold. We slogged through the remaining 5 miles or so and road walked about a half mile to the hostel. It was pretty full of hikers staying dry, but we managed to get a bunk and dry out for a bit. The wind and storms only got worse, as two nearby huge tree limbs came down while we hung out in the hostel. One of them, the size of most trees, absolutely crushed a large compost bin the hostel owner had built himself. Luckily, no one was hurt. It was nice to not be out during some of this intense storm, as it was not fun hiking through it.

On the positive side, we got the cards and care package from Will and the Lutron gang. That totally made a crappy day awesome. Many many thanks guys. Roughly half the food was eaten in minutes.

The storms have blown out, so tomorrow we head over the massive Mount Moosilauke, our official entry to the White Mountains. Other than Katahdin itself, this is the one climb that I’ve been dreaming about since we started this crazy trip. It’s over 4 miles up to the summit and nearly 4500 feet of elevation gain.

We are now heading into the final and by far most difficult stretch of the trail with the Whites and western Maine coming up in the next few weeks.

Vital stats for Wednesday, August 13th :
Milestone – less than 400 miles left to Katahdin
Miles hiked today – 14.5
Mood – thankful for the goodies and to be dry, psyched for the Whites
Smell – hostel clean
Song stuck in my head – Salt by Bad Suns