We had some rain showers last night, so everything was cold and damp this morning. The Whites seem to be very damp almost all of the time from what we’ve seen thus far. We got up and hiked down to Lonesome Lake and the hut that is there. Lots of people who stayed at the hut were milling about as we grabbed some potable water and went on our way. 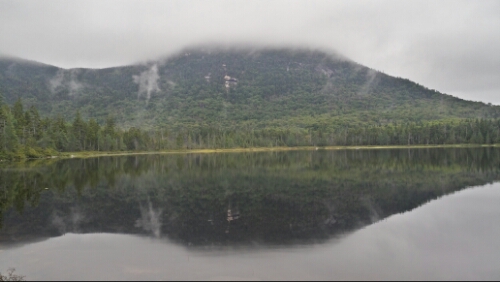 We descended down to Franconia Notch and went under I-93. Then we began the big climb of the day, up to Franconia Ridge. This was a steep and arduous hike. It wasn’t a scramble like Kinsman, but it was rocky, long, and hard. It was a little misty, cold, and windy as we hiked up onto the ridge. We got up to the 2 mile long open ridge above the tree line around 1pm or so. It was foggy and we were in a cloud without any views, but fine otherwise. 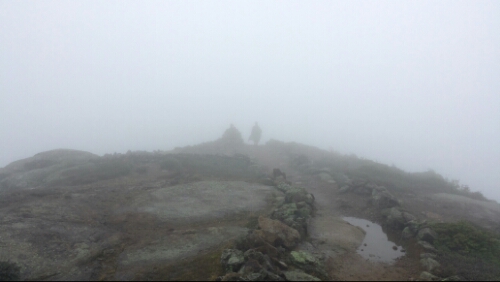 Cairn and Trippy off in the cloud 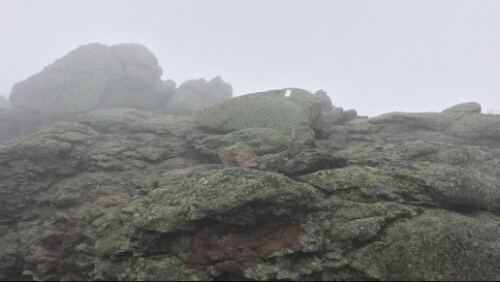 Rock scrambles up near Mount Lincoln

As we got closer to the end of the open Franconia Ridge near Mount Lafayette, the rain picked up. Then shortly after that, the wind got intense. Then we started to get some small hail or sleet or something similar, too. I usually ask former thru-hikers what their least favorite section is (along with their favorite), and a number answered with, “The Whites, if you have bad weather”. I get it now. It was freaking atrocious up there in the storm. It was super cold and the wind gusts were blasting us around (and there isn’t a lot of room to get blasted up there without flying off the cliffs). It was intensely powerful and scary and it came on so fast we literally had no time at all to get out of it. We were fairly lucky that we weren’t too far from the tree line. We moved as fast as we could, which wasn’t fast at all, to get down and under some cover. The rain was blowing sideways, so it was impossible to stay dry. The wind was whipping really hard (AMC caretaker said ~60 mph) and it was in the 40’s up there, so once we got wet my fear was hypothermia. We kept moving though and stayed warm enough. It definitely got a lot better once we were below the tree line again. We hiked on for a few more miles, but called it an early day to dry out and warm back up (nothing like some delicious Ramen noodles to heat the hypothermia out of your body!).

Tomorrow we are hoping for some clear weather and to make up a few miles. So far the Whites have been quite a test.

Vital stats for Sunday, August 17th :
Miles hiked today – 12.6
Mood – glad to be warmed back up, hopeful we don’t have to deal with that kind of weather again
Physical state – ok, no major problems
Smell – unclear, nose froze off, only two semi-useless holes left on face where nose used to be
Song stuck in my head – none today, too much wind!

After breakfast at the Greek restaurant / diner in town, we checked out of the Autumn Breeze Motel (nice place) and called the Shuttle Connections lady again and got shuttled back to the trail around 9:45am. It was overcast mostly today, but the temperature stayed nice and cool for hiking. We ascended up to the Kinsman Ridge, which was rocky and slow hiking, but not too bad. We spent a chunk of the time remaining in the morning navigating through that and then we started the big climb of the day up to the Kinsman Mountains. We had heard that the ascent up to South Kinsman was a real tough rock scramble and indeed it was. 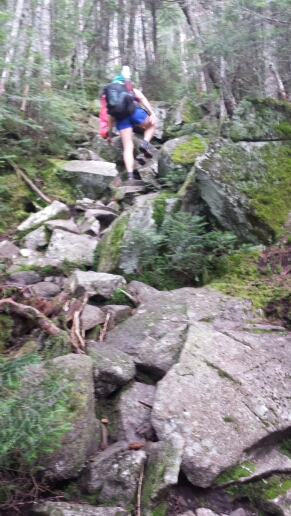 Trippy navigating up the rocks

The last mile was very slow going. We popped out above the tree line for a short while though once we hit the summit. The views were outstanding. 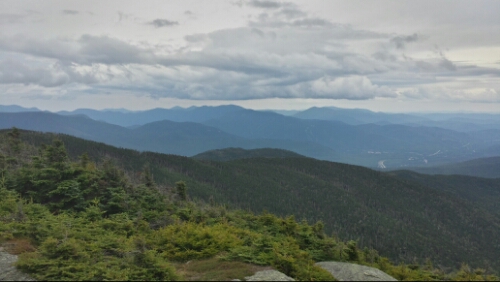 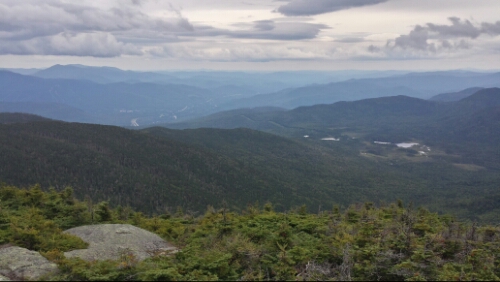 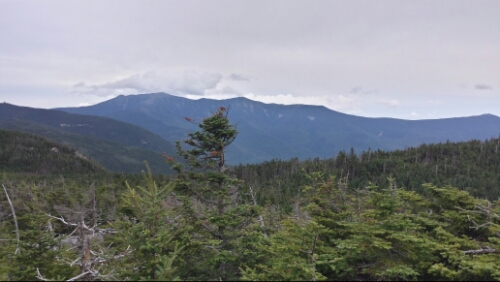 Franconia Ridge (we climb that tomorrow)

It was really cool to have these great views after the hard work. We then crossed over to the North Kinsman summit and then descended. The descent was very rocky and slow, also. We made our way down and found a small established campsite maybe a 1/2 mile from Lonesome Lake and it’s hut. They have these rustic huts up here in the Whites that are available for people to rent. They are apparently popular with many day hikers, but are a bit pricey ($125 per person) for having no showers and “composting” toilets. I can not take a shower for free out here!

We are scaling our planned daily miles back here in the Whites to between 13-15ish because it’s so challenging. Today we were a little short due to the late start, but it seems like finding stealth camping here is going to be tough, so we figured we shouldn’t pass up a nice flat spot.

Vital stats for Saturday, August 16th :
Milestone – 1800 miles in the books
Miles hiked today – 12.7
Mood – good
Physical state – feeling it in the knees and legs a bit more after the tough descents
Smell – aight, for now
Song stuck in my head – Today by The Smashing Pumpkins