After an uneventful night, we headed up Moose Mountain first thing in the morning. We hit the south peak and chatted with a guy who told us he lives on a nearby road. He had a cute little golden retriever puppy with him. It turned out he and his son are both PSU alum. WE ARE! 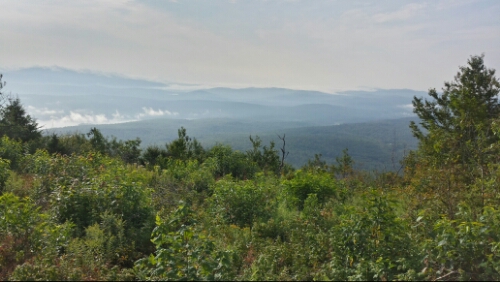 We then crossed over to the north peak, which had no view, then descended down and immediately began the next ascent up to Holt’s Ledge. This was a steep chute up to a viewpoint right on the side of a sheer cliff.

After that little dirt patch, it's a crazy high cliff

We hiked along the side of the cliff for a bit, then descended down again. After lunch, we started the big climb of the day, up to Smarts Mountain. We are definitely back in challenging climbing territory. Smarts was a beast, the first half was loaded with steep granite rock climbs (you just kind of hope your shoes are gripping it) and the second half was just a monstrously steep 3/4 mile hill up to the peak. 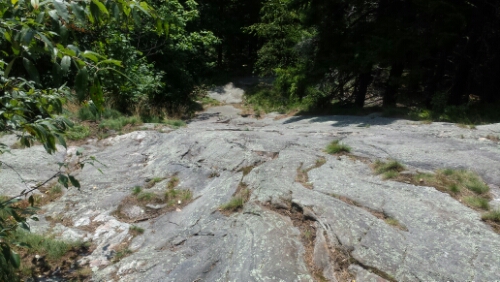 Perspective is hard to see here, but this is a really steep granite "trail"

The bummer was that the fire tower with the views at the top was closed for repairs. I was tempted to sneak up, but there was some crap about a $5000 fine. Then we descended down Smarts, which was over 4 miles of descent and was much easier trail than the ascent side.

We have been keeping an eye on the weather for tomorrow, which looks atrocious. They are calling for heavy storms and flooding all day. Yeaaaaa what a great day to hit the Whites! We decided to push farther than planned today at least part of the way up the last Mountain before the Whites, Mount Cube, in order to slightly minimize our stormy hike to Glen Cliff tomorrow. We found a flat spot and stealth camped roughly 1/4 past the Hexacuba Shelter. It was a very challenging day to hike 20 miles. Tomorrow we will have around 14 miles to hit the Hikers Welcome hostel in Glen Cliff, where we plan to stay for the afternoon and night due to the predicted weather.

Vital stats for Tuesday, August 12th :
Miles hiked today – 20.4 (probably our last 20!!)
Mood – good, other than the annoyance of the predicted crapola weather tomorrow
Smell – worse than the puppy breath from little puppy we saw this morning
Song stuck in my head – Lost by Frank Ocean